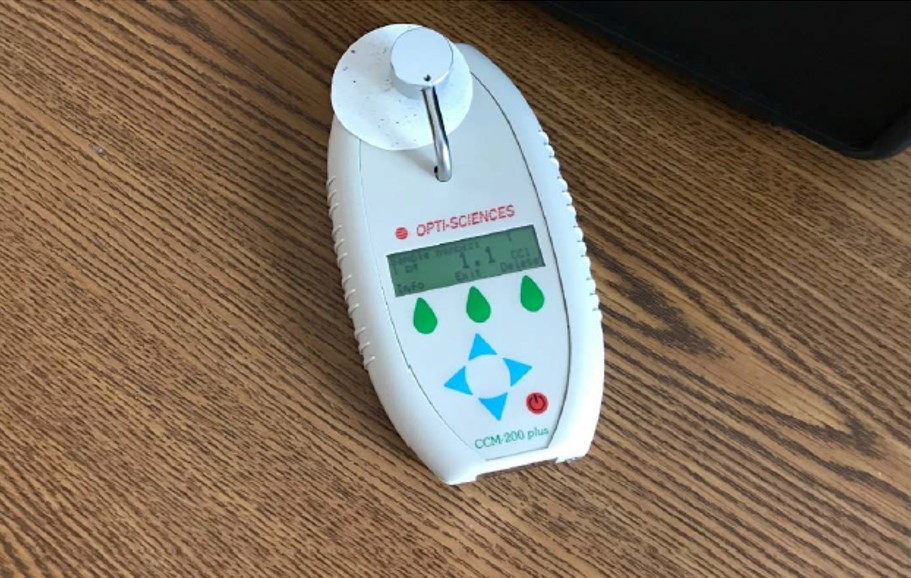 Algal samples are measured on filter paper with the CCM-200 Plus Chlorophyll Meter.

The methods involves extracting samples from water and using the CCM-200 Plus Chlorophyll Meter to quantify the chlorophyll-a (Chl-a) in the sample. Chl-a is a photosynthetic pigment and by measuring this parameter scientists can better understand the dynamics of algal blooms. Water samples were taken from near surface (0.5m depth) and deeper waters (5m depth), enabling a better quantification and understanding of algal bloom dynamics across the rivers system. The water samples were then sieved through filter paper on which the chlorophyll measurements were made. Below, more details about the method are provided by the scientists from the EPA.

The CCM-200 Plus Chlorophyll Meter is a low cost, easy to use handheld meter that quickly measures the chlorophyll concentration of a sample. Typically, the CCM-200 Plus is used to measure vascular plants, such as agricultural and horticultural crops, but, as this application has shown, the CCM-200 Plus can be adapted for other purposes.

The following information on the algal bloom study in the USA is from Opti-Science:

Researchers from the U.S. Environmental Protection Agency, and the St. John’s River Water Management District use the inexpensive CCM-200plus chlorophyll content meter for measuring Chlorophyll-a in river water samples and tracking algae blooms. This provides a much less expensive option than chlorophyll fluorometers, and in some cases, improvements.

A quotation from the publication:

“We believe the use of the CCM-200plus provides researchers with a relatively inexpensive tool to quickly track the progression of Chl-a and hence, algal blooms, and inspire more detailed investigation into algal bloom occurrences in CDOM-stained lakes and rivers.”

“We believe the CCM-200 plus provides a valuable screening tool for monitoring Chl-a concentrations in surface waters stained with CDOM, where fluorometry measurements are biased and unreliable (Proctor and Roesler 2010).”

“Other instantaneous methods that are costly and time-consuming include: readings available using hand-held fluorometers and other chlorophyll-specific probes (Beutler et al. 2002, Zamyadietal. 2016).”

“Fluorometers give accurate and instantaneous values, but can cost several thousand dollars for purchase, calibration, and repair. An even greater limitation to fluorometry is encountered in rivers and lakes rich in colored dissolved organic matter (CDOM), like those found in the lower St. Johns River basin, due to the interference of CDOM in the blue visible wavelength range (Proctor and Roesler 2010).”

“In our study, we compare measurements obtained using the CCM-200 plus to concentrations derived using traditional spectrophotometer lab analysis.”

“The St. Johns River is a high CDOM (black water) river because of the substantial tannic-laden freshwater input it receives from the extensive swamps and marshes found throughout its drainage basin(DeMort1990). Mean dissolved organic carbon concentration is about 20 mg/L and dissolved color typically exceeds 50 platinum cobalt units (Pt-Co; Phlipsetal. 2000).”

“The River also exhibits a wide temporal and spatial variability in both algal biomass and composition, which allows testing of the CCM-200plus over a wide range of conditions.”

“The lower basin of the river has been subject to frequent, intense algal blooms (DeMort 1990, Phlipsetal. 2000, 2003). Under Florida statutes, the St. Johns River Water Management District (District) and the Florida Department of Environmental Protection (DEP) are directed to assess and restore water quality in the St. Johns River. As a part of this directive, the District routinely documents and attempts to track algal blooms that occur on the river. Given the unpredictable nature and distribution of these blooms, expense and time of water chemistry analysis, and staff time, a quick, inexpensive, and reliable method of identifying the intensity and location of algal blooms is necessary.”

“Water samples were collected from the St. Johns River using a Van Dorn sampler, grab bottle, or as a vertically integrated composite using a modified Coliwassa tube at a number of previously established water quality sites.”

“Samples were either collected from deep (>1.5m) areas of the channel (mid-river sites) or from near-shore shallow water sites (<0.5 m).”

“Immediately upon collection, water samples were filtered through a 47mm diameter, 1.2 μm Whatman glass microfiber filter paper (CAT No. 1822–047) using a Thermo Scientific Nalgene reusable holder and a Mityvac MV8000 until the filter was clogged or saturated, typically between 200 and 600 mL with vacuum gauge pressures no greater than 5 mm Hg to prevent cell damage and tearing the filter paper.”

The CCI numbers collected were adjusted (ACCI) with the following equation:

“The filter paper was carefully removed and placed in the chamber of the CCM-200 plus and the CCI number was recorded (Fig.1).”

“The volume of filtered water was measured and recorded to the nearest mL.”

“A 1L amber bottle from the same water sample stock was filled, placed on ice at 4oC, and later analyzed for Chl-a content (method: SM10200H) within 24 h at the District chemistry lab in Palatka, Florida.”

“The CCI numbers collected were adjusted (ACCI) with the following equation:

“The CCM-200 plus read blank, unused filter papers as 1.0 (indicating zero chlorophyll content); therefore, we used additive constant offset of 1.0 for all CCI readings to set the numerator baseline to 0.0.”

“The 1000 divisor allows comparison of the CCI values to District Chl-a units (mg/L).”

“During field water sampling, a 1-L amber bottle from the same water sample stock was collected and preserved with Lugols (3ppt) and sent to the University.”

“To ensure homogeneity, water samples were homogenized via a churnsplitter and divided between Chl-a and phytoplankton taxonomy bottles. Results were later used to compare the percent accuracy of Chl-a in our predicted model to the percentages of Division phytoplankton biomass, using Pearson’s correlation. For example, an ACCI predicted value of 33mg/L to the laboratory Chl-a value of3 5mg/L would be 94% accurate. We then compared the percent accuracies to the percentages of cyanobacteria and plankton in each sample.”

“We collected 103 paired samples from mid-river open water sites and 44 from near-shore vegetated sites. Chl-a concentrations measured by spectrophotometer ranged from 0.003 to 0.126 mg/L at mid-river sites and from 0.013 to 0.067 mg/L at the near-shore sites.”

“Regression analyses revealed that for mid-river sites, ACCI derived with the CCM were positively related to Chl-a concentration (Fig. 2). The regression was significant (P < 0.01), accounting for 91% of the total variation in the data (Fig. 2). For the near-shore vegetated sites, the regression was also significant (P < 0.01), but ACCI scores only accounted for 56% of the variability in Chl-a concentration (Fig. 3). We believe the lower correlation coefficient for vegetated sites and the increased variability could reflect the presence of leaf particles from the submerged vegetation in the water column.”

“Over the course of this study period, phytoplankton in the river were dominated by cyanobacteria, Chlorophyta, and diatoms. Cyanobacteria contain phytochromes, an accessory pigment, some of which absorb at different wavelengths (700–800 nm; Rockwelletal.2009) than chlorophyll, which absorbs maximally at 700 nm (Mullet et al. 1980). With this in mind, we tested whether CCM measurements varied as a function of the percent of cyanobacteria in a sample. Using Pearson’s correlation, we found that there were no significant correlations between accuracy of the relationship between Chl-a concentrations with the CCM and percent dominance by cyanobacteria (P=0.376), Chlorophyta(P=0.580), or diatoms (P=0.515). Thus, the CCM’s reliability is not dependent on the types of plankton and bacteria found in the St. Johns River over the range of Chl-a concentrations sampled in this study.”

“Homogenization of the water during filtration may help alleviate this unbalance; however, best results occur when smaller, single-celled algae colonies (e.g., Microcystis spp.) dominate the phytoplankton.”

“It is also not possible to account for algal unevenness on the filter paper by taking multiple readings and averages.”

“Additionally, we found that in samples containing high Chl-a (greater than 0.080mg/L) the filter paper became clogged with lower volumes of water, around 250 mL. This might be a problem if intense algal blooms are encountered, and almost no water is able to pass through the filter. In this situation, samples could be diluted with a known volume of deionized water and the CCI reading later multiplied by the correct factor.”

“…our equation relating CCI readings to Chl-a concentrations are only applicable to the areas of the St. Johns River in which samples were taken, mainly in deep areas of the river (5m), sampled near the surface(0.5–2.5m), located in mid-stream, and when dominated with similar phytoplankton composition. Other studies are needed to determine if the same degree of accuracy is obtained in other areas of the basin, and any other water bodies where this method is applied.”

“Our study indicates that while this CCM can be used to assess Chl-a concentrations in densely vegetated habitats, the model fit is subject to higher variability than for main stream areas. In addition, it is important to understand that in using our method, some degree of variance in the regression model must be accepted. That degree of variance was minimal in our mid-river open water sites(R2=0.91), but may vary in different water bodies.”

“We believe the CCM-200 plus provides a valuable screening tool for monitoring Chl-a concentrations in surface waters stained with CDOM, where fluorometry measurements are biased and unreliable (Proctor and Roesler 2010).”

“The unit self-calibrates, gives readings in seconds, and requires no solutions or extra software or equipment to function.”

“Although this study was focused in the St. Johns River, we believe the methods can be used in other large lakes, lagoons, and reservoirs, as most study sites were located in lacustrine areas of the river. However, given certain limitations of the use of the CCM, we recommend the addition of intermittent comparisons of Chl-a values obtained with laboratory procedures because relationships between CCI readings and Chl-a concentrations will likely vary between water bodies and habitats.”

Publication on the algal bloom method: