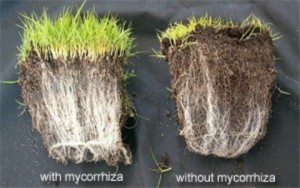 can plants communicate with one another?

This question is not as outrageous as it might at first seem. Certainly, plants are not like The Ents in the Lord of the Rings, coming to life and talking with one another. But scientists have amassed a large amount of evidence to suggest that plants do communicate with each other. They communicate with nutrients, water and hormones. And they do this primarily via underground root and fungal networks known as mycorrhizal networks.

The image at the top of this post is of plants with and without mycorrhiza. They look like spiderwebs enmeshed in the root system. Mycorrhiza are fungi that form a symbiosis with plants. They form on or within plant roots and provide nutrients (primarily phosphorus and nitrogen) and water to the plant host. The plant, in return, provides carbon and sugars to the fungus so it can grow and reproduce. Many species, if not most, have mycorrhiza and they are recognised to form a fundamental function in ecosystem functioning. Scientific studies have shown that plants without mycorrhiza have lower growth rates and generally show poor health. Even entire ecosystems or forests show poorer health and vitality when mycorrhiza are absent. 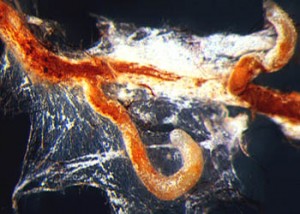 Mycorrhizae on a plant root appears a bit like a spiderweb. Image source: http://www.fsl.orst.edu/mycology/poster/poster.html

The mechanism for plant communication is through the mycorrhiza network. Plants can send and receive various types of messages to one another. It is important to keep in mind that plants are not consciously or purposely communicating as humans or animals might communicate in a social sense. Rather, chemical signals, hormones and nutrients are passed between plants which can trigger signals in the recipient plant to undergo physiological or morphological changes.

Nutrients, such as phosphorus and nitrogen, and even water, move from one plant to another via source-sink relationships. One plant may be rich in a given nutrient, say nitrogen, and its neighbour relatively poor. Nitrogen then moves from the rich plant (source) to the poor plant (sink). This movement generally occurs passively by mass flow. That is, a plant is not actively pushing or moving nutrients from itself to a recipient. Rather there is a gradient of a high resource area to a low resource area and these areas naturally equal out.

Hormones can also pass between one plant and another. An increase or a decrease in hormones signals to the plant to undertake a physiological response such as growing taller or inducing defenses. For example, an experiment on tomato plants showed that when a leaf-chewing caterpillar attacked one plant, hormones were sent to a neighbouring tomato plant which caused that plant to increase defensive enzymes and improve its resistance to herbivory (Song et al 2014).

how long does it take for messages to pass from plant to plant?

Just like our friends The Ents from the Lord of the Rings, plants rarely do anything quickly. Messages do pass between plants but it is hardly a rapid process. Nutrients have been found to pass from the donor or source plant to the mycorrhiza network within 1 or 2 days. A neighbour plant was found to have these nutrients in its leaves after 3 days (Gorzelak et al 2015). Stress signals, such as those sent in our tomato example above, tend to occur more quickly but still in the order of 6 hours. 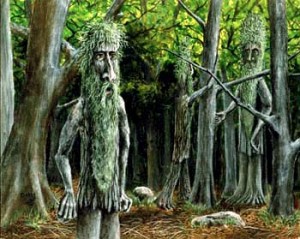 why do plants communicate?

It seems illogical that a healthy plant rich in nutrients should pass these onto its poor, unhealthy neighbour. We are taught that plants are in a battle for survival, where the fittest wins to reproduce and pass its genes onto the next generation. Therefore, giving a boost to your unfit neighbour seems counter intuitive.

But if your neighbour is a kin or close relative then there is sense is lending them a hand. Of course, humans do this all of the time when we do simple things such as baby sitting and feeding our nephews and nieces. In evolutionary biology this process is known as inclusive fitness where its beneficial to ensure the shared genes between closely related individuals are passed onto the next generation. Ecologist know that there is a high probability that two plants growing side by side are closely related. Seeds from a parent tree more often than not land nearby. Therefore, giving up nutrients to your neighbour is similar to feeding your children.

On the other hand, there is ample evidence that nutrients pass between species. For example, Song et al (2015) observed that a ponderosa pine species received both carbon and defence signals from a neighbouring Douglas-fir through the mycorrhiza network. To explain this, evolutionary biologists have another term called group selection. In this case, the health of the community can lead to more healthy individuals and therefore an increase chance of surviving and passing on genes. Ecosystems tend to be healthier and perform more efficiently when there is a diversity of species. Therefore, a plant may assist its non-related neighbouring plant for the greater good!

Another explanation for plant communication is not about the plant at all but rather it’s all about the fungus. Mycorrhiza need to reproduce and pass their own genes on independently of their host plant. Therefore, having a healthy host is vital to the survival of the mycorrhiza. These fungi hedge their bets and do not rely completely on the survival of a single host. Infesting two or more plants provides the fungus with a safety net – particularly if the plants are unrelated species. As stated by Gorzalek et al (2015):

If the networking fungus acquires more carbon from one plant than it requires for its own fitness, it can then supply the excess carbon to other networked plants in need, thus diversifying its carbon portfolio for insurance against potential loss of one of the hosts. This more secure carbon source from multiple plants is important to the fitness of the fungal species in variable environments …. From the fungal species perspective, the relatedness of plants involved in the network should be of no consequence, as long as a long-term carbon source is secured.”

Plants can communicate via an association with symbiotic mycorrhiza. Communication is an important mechanism for plants to grow efficiently and to survive attacks from predators. Professor Simard explains further: