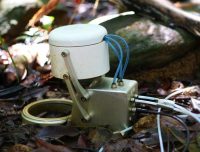 A case study from Eosense:

This gap in knowledge is a considerable issue since it is poorly known what factors control the sources and sinks of GHGs from tropical ecosystems, and in particular tropical soils, which makes it difficult to try and estimate how climate change will influence these dynamics.

Understanding the controls–typically soil temperature and moisture, but also other factors including slope and soil texture–on soil O2 and GHG concentrations and fluxes across different landscapes will help us to better understand the potential changes that climate change may have in the future on GHG balances.

Scientists at the Luquillo Experimental Forest (LEF), Puerto Rico, deployed several of the Eosense eosAC gas flux chambers to better understand the dynamics of GHGs in a tropical landscape.