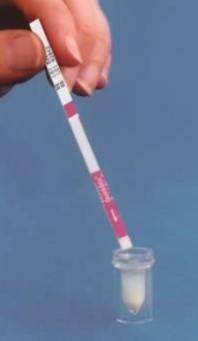 T-2 and HT-2 can contaminate a wide variety of grains, processed foods, and animals.

Like several other mycotoxins, T-2 and HT-2 pose health risks to humans and animals.

T-2 and HT-2 are trichothecene mycotoxins produced by several strains of Fusarium fungi including Fusarium langsethiae, F. poae, and F. sporotrichioides. T-2 and HT-2 significantly affect a plant’s ability to produce cells and conduct protein synthesis. As a metabolite of T-2, HT-2 cannot be differentiated immunologically.

Animals are particularly susceptible to the effects of T-2 ingestion, often due to eating moldy whole grains.

Despite metabolizing T-2 rapidly, production animals experience impacts similar to DON, such as lower feed intake and reduced weight gain, as well as chronic issues in the immune and reproductive systems.

The liver is at risk with the T-2/HT-2 mycotoxin, affecting rabbits, pigs and rats. T-2/HT-2 reduces fertility in sheep and cattle. It can cause oral lesions in some species, such as chickens.

When inhaled, T-2 is highly toxic. On the skin, the toxin is absorbed quickly and can produces lesions. In humans, T-2/HT-2 are rapidly metabolized and do not remain in the body. However, the impact of ingestion can be severe at high concentrations. T-2/HT-2 have a high fatality rate, necessitating rapid, reliable T-2/HT-2 testing.

There are controversial accounts and some evidence that T-2 has been used in chemical warfare, including against the US forces during Operation Desert Storm. In the Soviet Union during World War II, a disease later identified as Alimentary toxic aleukia (ATA), and linked to high levels of T-2 and HT-2, broke out after grain was consumed that overwintered in the field. ATA causes a burning sensation throughout the digestive tract, destroys the ability for bone marrow to produce blood, and eventually ends in hemorrhaging of the intestines, gums, and nose.

Testing for T-2 and HT-2 is important because trichothecene mycotoxins are incredibly resistant to heat and UV light.

The toxin becomes inactive only after it is heated to 500 degrees Fahrenheit for 30 minutes, so the toxin will survive most food processing. Human consumption can lead to severe health consequences.

Regulations vary globally, and can be found as low as 15 ppb in cereal-based infant food (EU), but most limits are greater than 50 ppb. T-2/HT-2 toxicity is well characterized in research, even though it is not well regulated as a result.

Both T-2 and HT-2 are toxic, and emerging regulations and current recommendations do not require differentiation between the two forms of the toxin.