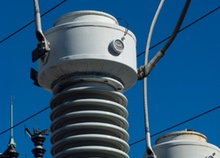 Partial discharge, an electrical phenomenon, is a localized dielectric breakdown. Partial discharges cause a progressive deterioration of insulating materials, which eventually leads to electrical breakdown. Such an electrical breakdown may ultimately lead to complete failure of equipment. Especially for very expensive equipment such as transformers used in power generation or smart grids failure must be avoided. Electrical power supply reliability for consumers and industry depends critically on sustained operation of these transformers.

Integrity of insulation has to be monitored and confirmed during manufacturing stage and during operation in regular intervals. Regular inspections can trigger early warning signals for maintenance.

AE-measurement is a suitable method to detect and locate partial discharge in transformers. It is a non-intrusive method and capable of monitoring the whole volume of a transformer. An AE test can be conducted while the transformer is in service.