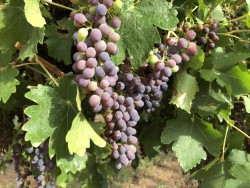 Irrigating scheduling and amount can be accurately determined by combining sap flow (crop water use) sensors and evapotranspiration (ETo) data. This article outlines how growers, researchers or physiologists can use the Implexx Sap Flow Sensor, alongside the ATMOS 41 weather station, or the Implexx Evapotranspiration (ETo) station. Although this article has a focus on grapevines, the principles can be applied to any crop for irrigation management. 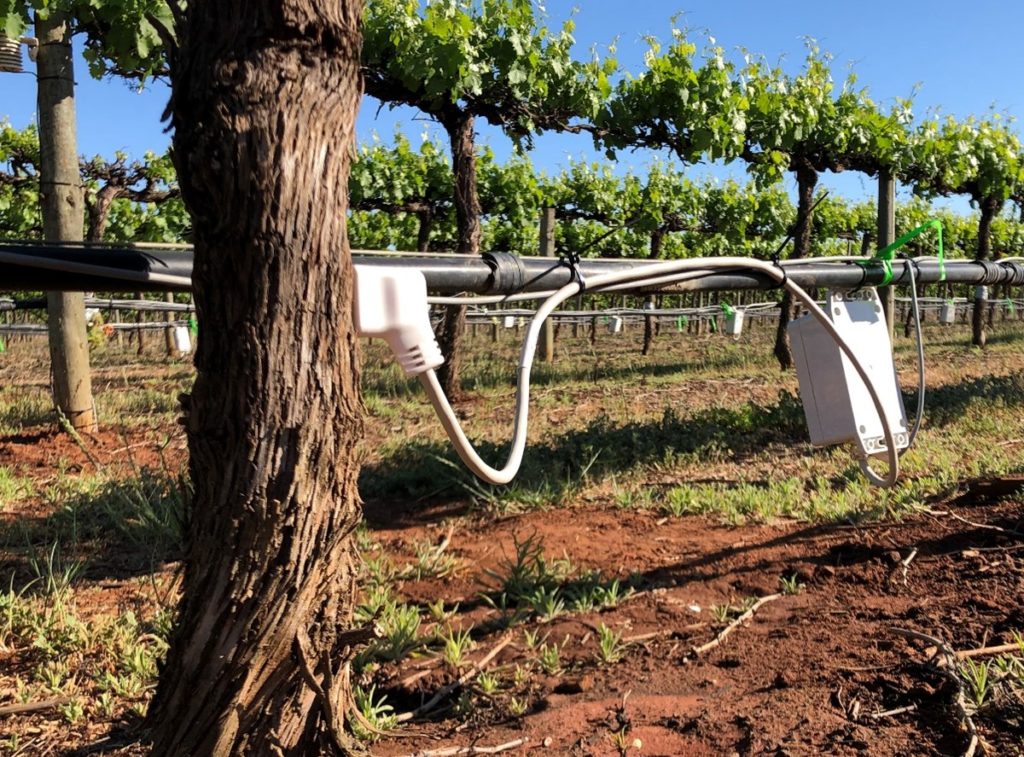 a weekly pattern of sap flow

During the 2019/2020 growing season, sap flow was measured on Shiraz and Chardonnay grapevines at the NSW Department of Primary Industries Griffith Research Station. An example data set of sap flow is presented in Figure 2. These data were of 7 days during the first week of November 2019.

Sap flow will vary between vines and varieties. For example, Figure 2 shows sap flow in a Shiraz grapevine had a peak around 0.7 litres per hour whereas a Chardonnay vine, at the same location, peaked around 0.4 litres per hour. The differences between vines and varieties are due to numerous factors. In this case, however, the Shiraz canopy, or total leaf area, was almost twice as large as the Chardonnay so it was a bigger vine with more water demand. 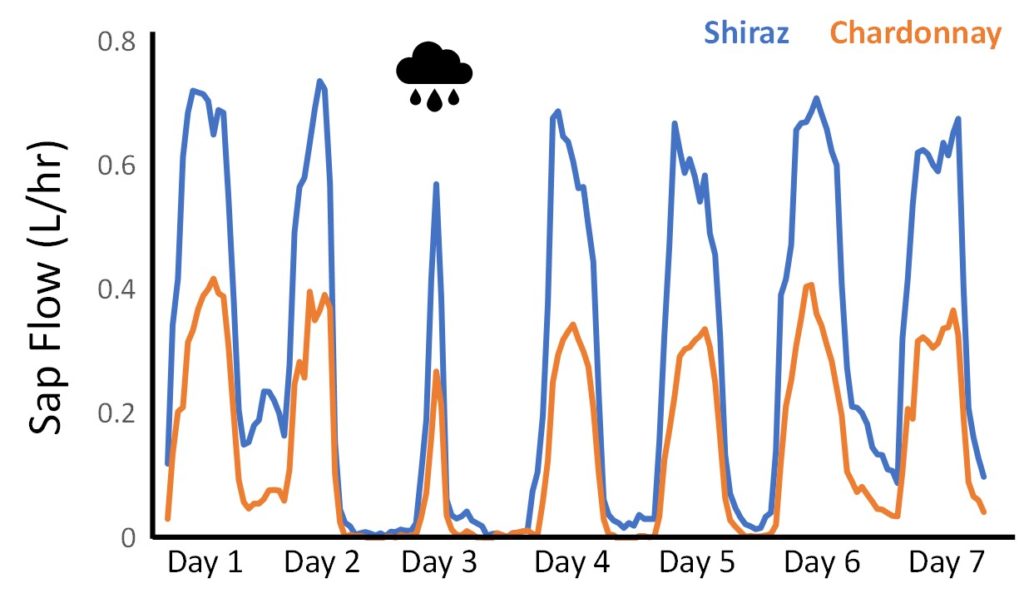 The most important information a sap flow sensor can provide is the total vine water use (litres of water per hour or per day). Understanding the actual amount of grapevine water demand is critical for efficient use of water resources and irrigation management. With knowledge of water output from a vineyard, it is possible for sap flow sensors to improve vineyard water use efficiency and potentially lower irrigation costs.

Figure 3 presents the same data from Figure 2 but expressed as litres per day. Excluding the rainy day on Day 3, sap flow per day ranged between 6 and 12 litres for Shiraz and 4 to 6 litres for Chardonnay. The total daily sap flow will vary according to weather conditions, but these values provide an insight into how much water an individual vine requires. 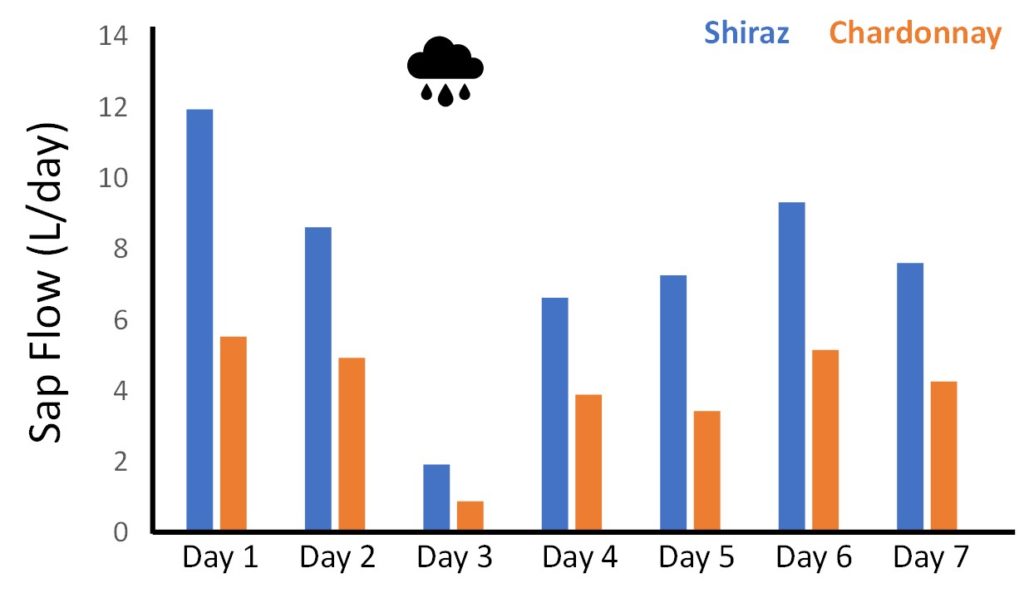 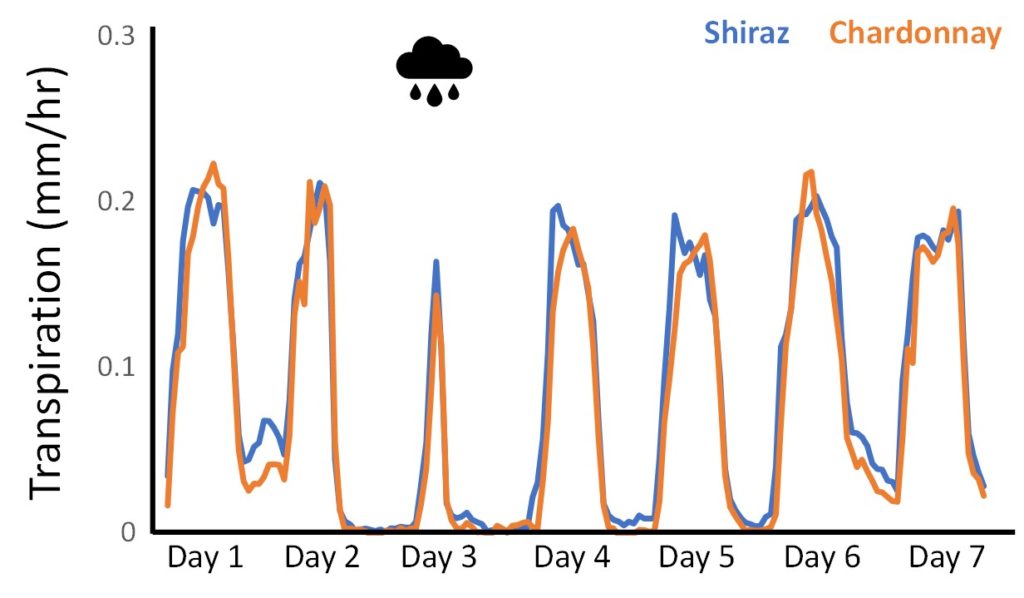 Figure 4. Transpiration (mm per hour) can be easily calculated by dividing total vine sap flow by total vine leaf or canopy area. The Shiraz (blue line) and Chardonnay (orange line) transpiration is similar indicating differences in sap flow, shown in Figure 2 and 3, were due to the Shiraz having a larger leaf area/canopy than the Chardonnay vine.

From Figure 5, total vine water demand for the Shiraz and Chardonnay vines, growing in Griffith during early November 2019, was approximately 3 mm per day. Note that actual vine transpiration is 2 to 3 times lower than ETo. Therefore, if irrigation management was based only on a regional weather station’s ETo values, then the amount of irrigation may be 2 to 3 times more than is required by the vines. In this example, an irrigation decision based only on ETo may lead to over irrigation. Instead, irrigation decisions should be based on ETc.

In theory, irrigation can simply replace the amount of water that was transpired by the grapevine. In this example, in Griffith during the first week of November, that is around 3 mm per day per vine. However, in practice, one drop of water does not necessarily replace one drop of sap flow. There are other factors to consider, such as leaky pipes/valves, surface run-off, drainage, and so on. Therefore, an additional amount, such as an additional 10 or 20 percent, should be added to total irrigation. 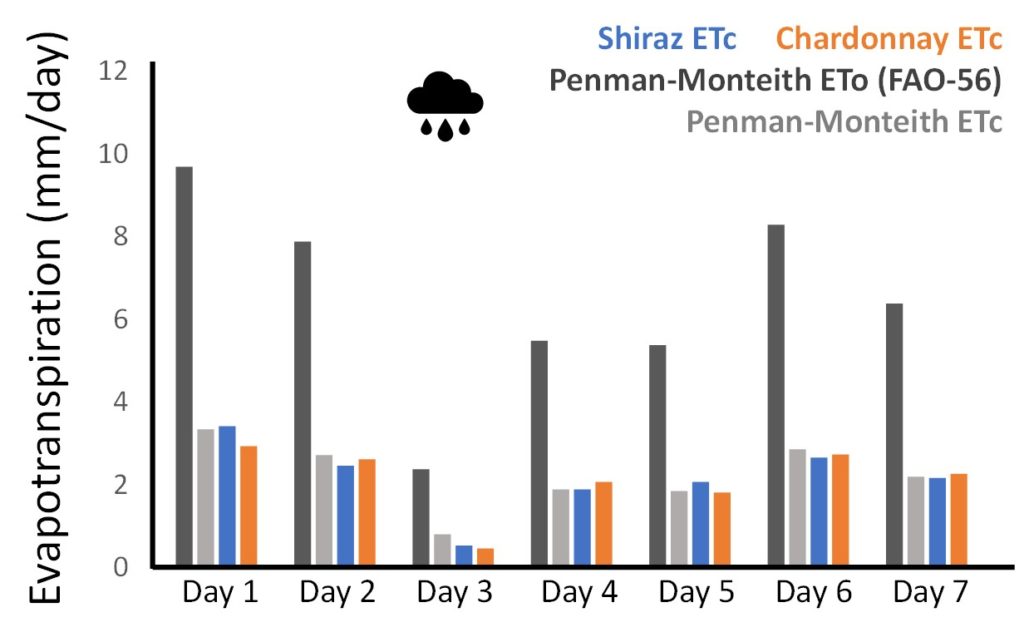 Irrigating according to the plant’s requirements is a more efficient use of water resources. In this regard, sap flow sensors can be used to determine irrigation scheduling.

Figure 6 shows a two-week period of soil moisture (measured at 200 mm soil depth with a TEROS-11 Soil Water and Temperature Sensor), Shiraz and Chardonnay transpiration (ETc), and Penman-Monteith crop evapotranspiration (PM ETc). The data were collected between November 8th and 21st, 2019, from the NSW Department of Primary Industries Griffith Research Station. The vines received irrigation on Day 1 and there was no subsequent irrigation or rainfall over the two-week period presented in Figure 6. 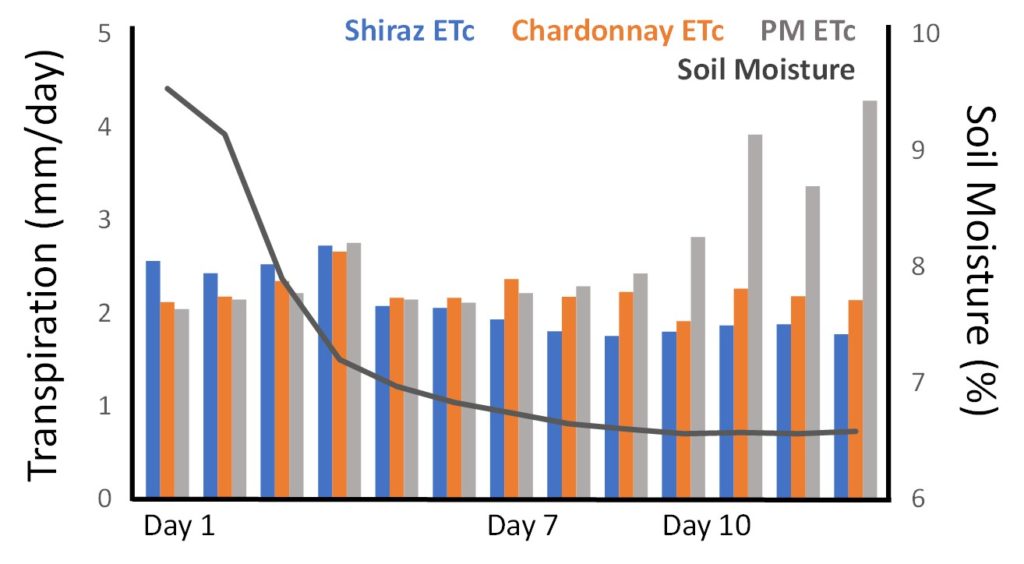 At the start of the period, Shiraz and Chardonnay ETc equalled, or was slightly greater than, PM ETc. This pattern indicates that the measured grapevines had access to ample soil moisture and were under no water stress.

From approximately Day 7 and Day 8, Shiraz and Chardonnay ETc decreased relative to PM ETc. Such a pattern indicates that vines are starting to experience mild water stress.

Towards the end of the two-week period, Shiraz and Chardonnay ETc were substantially lower than PM ETc. This pattern indicates that vines are experiencing water stress. Therefore, the results from Figure 6 suggest that irrigation should have commenced around Day 7 or 8 for these measured vines. 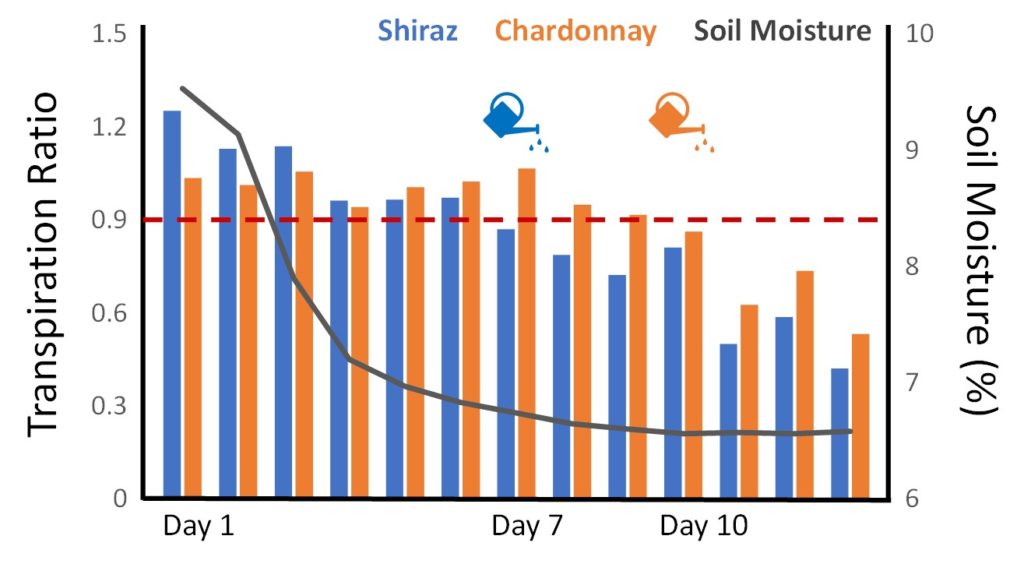 Visit the Implexx Sense website for detailed information on the Implexx Sap Flow Sensor and more case studies on irrigation and sap flow: