Ever wondered what that slime is in your bathroom, or that plaque on your teeth? Most likely it is a biofilm – a community of bacteria growing within a slime on a surface that is constantly moist. Biofilms are everywhere – from that plaque on your teeth, to sewage pipes, to the guts of cows. Biofilms are fantastic for the bacteria within them, making them 1,000 times more resistant to antibiotics. But they can be devastating for humans by causing cancers and serious infections. 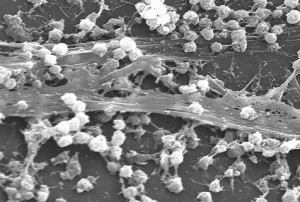 A microscopic view of a biofilm. Source: https://en.wikipedia.org/wiki/Biofilm 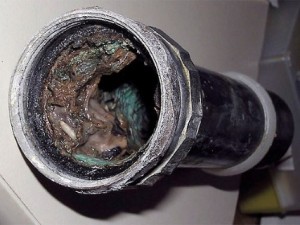 A macroscopic example of a biofilm on a kitchen drain pipe. Source: https://www.biofilm.montana.edu/

Biofilms are commonly referred to as bacterial biofilms, implying they consist of a single or multiple species of bacteria growing within a slimy substance as a community. However, in nature biofilms consists of multiple organisms ranging from bacteria, fungi, algae, yeast and protozoa. These communities can be highly diverse. For example, that plaque on your teeth right now probably consists of over 500 different bacterial species.

Biofilms can potentially grow and develop anywhere when 3 pre-requisites are met: there is a surface, there is moisture, and there are nutrients. Biofilms are three dimensional and range in size from a few cells to several inches. Biofilms can also take on emergent properties where they are born, grow and reproduce independently of the organisms that constitute the biofilm.

The life cycle of a biofilm and biofilm formation

Bacteria that exist independently, or a free-floating, are called planktonic. When planktonic bacteria encounter a moist surface with nutrients and aggregate, this is the first stage of biofilm formation. This is also known as “reversible attachment” where the bacteria may separate and become planktonic once again.

If the biofilm continues maturation then the second stage becomes “irreversible attachment”. As the term implies, the bacteria are now committed to the biofilm and during this stage the genetic expression of the bacteria may change. That is, gene function changes so the bacteria adapts and promotes the biofilm.

The third stage is called “maturation” and during this stage the organisms are completely sessile and are secreting the extracellular polymeric substance (EPS), or slime. The production of the EPS is the growth of the biofilm and this can be a fairly rapid process taking place over a number of hours. As the EPS grows more bacteria colonise, or multiply, within the EPS. Presumably, this is when other organisms, such as fungi, join the biofilm community.

The fourth and final stage is “detachment”. This is dispersal, or reproduction, that occurs when chunks of the biofilm detach and reform on some other surface. Alternatively, bacteria can once again become planktonic and re-start the biofilm life cycle.

The diagram below, courtesy of Montana State University, depicts the life cycle of a typical biofilm. 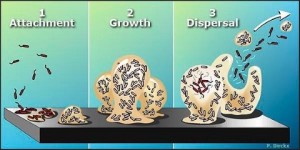 Are biofilms good or bad?

Biofilms allow microorganisms a better chance of survival than if they were free-floating. Therefore, biofilms can be good for the microorganisms within. Conversely, biofilms are potentially more harmful to humans than the individual organisms that are its constituents. For example, research has found that biofilms can be up to 1000 times more resistant to antibiotics than planktonic bacteria.

Biofilms can be harmful to human health. Biofilms have been associated with colon cancer and other cancers. Biofilms have been associated with over 80% of inflammatory and infectious diseases caused by bacteria ranging from ear infections to urinary tract infections (http://grants.nih.gov/grants/guide/pa-files/PA-07-288.html). The plaque (biofilm) on your teeth, leading to tooth decay, can be a problem. This type of biofilm can form rapidly over a number of hours and is one of the reasons why it is a good idea to brush your teeth daily. In rare cases, biofilms can also lead to tuberculosis or Legionnaires’ disease. In the case of Legionnaires’ disease, the bacterium Legionella pneumophila colonises biofilms in hot water systems. When showering, water passing over these biofilms can lead to health issues in humans however such cases are rare.

Biofilms can also cause issues to infrastructure. For example, sewage pipes can become completely clogged with biofilms which then need replacement. Our water supply tends to be nutrient deficient however biofilms can still form and develop. Management of water treatment plants, and the applications of disinfectants or chemicals to prevent large outbreaks of biofilms and contamination of drinking water, can lead to increase costs.

Generally, biofilms are ubiquitous and there is no avoiding them. Bacteria, and other microorganisms, are everywhere. For example, it is estimated that there are between 1,000 and 10,000 fungal spores per cubic meter of atmosphere at any one time and we are constantly inhaling such spores. However, biofilms (and fungal spores) largely become problematic when we neglect our health and well-being.

Some interesting biofilm experiments and research

Bacteria in biofilms undergo different genetic expression compared to their planktonic stage. The bacteria have remarkable phenotypic plasticity where there is a distinct planktonic phenotype and biofilm phenotype (http://www.dna.caltech.edu/courses/cs191/paperscs191/biofilms2002.pdf).

Biofilms also offer an example of self-assembling communities of bacteria. For example, bacteria can lie in a dormant state on the ocean floor around hydrothermal vents. When these vents become active, or what is called a black smoker, volcanic gases such as hydrogen and hydrogen sulphide (H2S) become available. Hydrothermal vents provide nutrient rich substrates and the black smoke activates bacteria that can thrive in hydrogen and H2S rich environment. These bacteria are planktonic and begin the biofilm formation process on the hydrothermal vent. As H2S oxidizes, a new environment is available for different types of bacteria and these then become physiologically active and are recruited to the biofilm. Once organic matter accumulates within the biofilm, more and more different types of bacterial species become physiologically active and join the biofilm. http://www.dna.caltech.edu/courses/cs191/paperscs191/biofilms2002.pdf 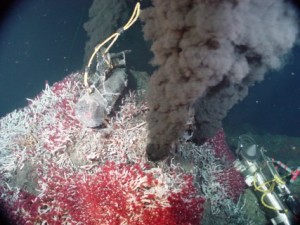 A black smoker where biofilms can form. Source: http://www.pmel.noaa.gov/eoi/gallery/smoker-images.html