The ATMOS 41, manufactured by METER Group, packages 12 weather sensors into a single, compact device. There are no moving parts to fail.

Installation and maintenance have been simplified to the maximum.

With a basic installation, the ATMOS 41 connects to the ZL6 series of data loggers. Simply plug in, and power off AA batteries. No programming and no wiring is involved!

Alternatively, a larger installation may include the ATMOS 41 Weather Station alongside other sensors that measure parameters including evapotranspiration, soil moisture, sap flow, plant growth and carbon allocation, canopy temperature, and more.

The ATMOS 41 is also ideal for IoT devices including LoRaWAN, NB-IoT, WiFi, and more.

The ATMOS 41 is ideal for anyone who needs to measure the weather: researchers and students, growers and agronomists, engineers and consultants. The ATMOS 41 is applied across many industries including mining, agriculture, horticulture, landfills, urban environments, meteorology, and more.

Since its introduction in 2017, the ATMOS 41 has been rapidly adopted by many user around the world including 20,000 units across the continent of Africa!

In Australia, there are many users from scientific researchers, growers, urban managers, landfill operators, mine sites, and more.

The ATMOS 41 can measure Penman-Monteith FAO56 or ASCE reference crop evapotranspiration via the Zentra or Eagle online platforms.

Edaphic Scientific supplies everything you need so that evapotranspiration measurements are as easy as possible.

It is also possible to test your own evapotranspiration equations or models with the ATMOS 41.

Measuring evapotranspiration via the ATMOS 41 is ideal for irrigation management, hydrology, groundwater, and other applications. 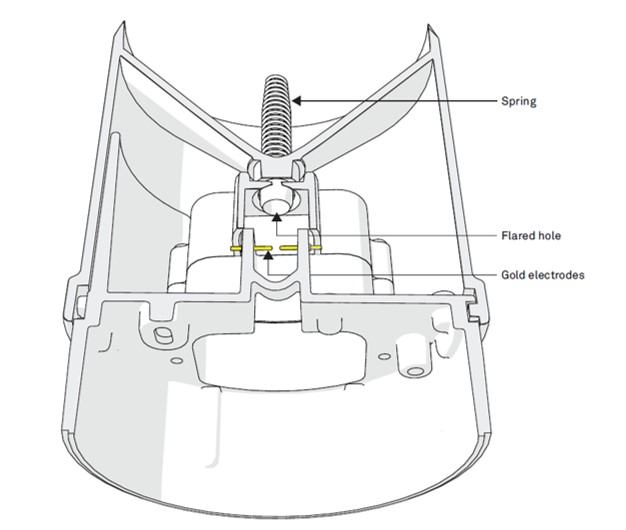 A schematic of the rain gauge inside of the ATMOS-41 weather station. Rainfall passes through the funnel into droplets which are then counted by the gold electrodes.

The ATMOS 41 introduces a unique mechanism that significantly improves the measurement of rainfall.

Other weather stations measure rainfall with a tipping bucket which are known to miss many small and large rainfall events.

The ATMOS 41 uses a unique, and precise, drip counter device that measures the amount of drops, of a known size, passing through a funnel.

The ATMOS 41 contains a 9.31-cm diameter rain gauge. During rain events, the flared hole forms the rain into drops that pass by the drip counter. The spring acts as a filter to keep out large particles but still allows enough flow so water does not back up. Gold pins measure each drop of rain. Because the flared hole forms a drop of a known size, the ATMOS 41 counts the drops and calculate the water volume. As the rain intensity increases, the drops become smaller, but the ATMOS 41 firmware contains an algorithm to automatically compensate for drop size as the rain increases.

When powered on, the ATMOS 41 counts water drops continuously and adds each drop to an accumulated total. When queried, the ATMOS 41 outputs the total rainfall (in mm) that has accumulated since the last query.

The ATMOS 41 is a significant improvement on other temperature and relative humidity sensors because it can output RH and vapour pressure. These parameters describe important characteristics of the environment for evaporation, transpiration and water transport which are required for agriculture, horticulture and hydrology applications.

Saturation vapour pressure is the amount of water vapour that the air can hold.

Actual vapour pressure is the amount of water vapour that is actually in the air at the time of measurement.

If you require an output of vapour pressure deficit (VPD), then the scientists at Edaphic Scientific can provide this parameter in the ES-SYS data logging system or we can assist you in programming this parameter into your existing data acquisition system.

an overview of the ATMOS 41 sensors

how accurate is the ATMOS 41?

A scientific study from ETH Zurich, Switzerland, that the sensor accuracy from the ATMOS 41 is as good, or better, than traditional sensors. Below is a summary of their findings as well as comparisons with traditional meteorological sensors.

The ATMOS 41 employs the latest technology to improve upon traditional measurement approaches. A key innovation on the ATMOS 41 is the drop-counting rain gauge technology. It uses gold-plated electrodes to detect and count discrete drops from a nozzle precisely engineered to produce a highly repeatable drop size. This no-moving-parts technology is less susceptible to mechanical failure than traditional tipping-spoon gauges. Three tipping-spoon rain gauges (Texas Electronics and ECRN-100) were deployed at our Forks, WA USA precipitation testbed (rainiest location in lower 48 US states) alongside three ATMOS 41 sensor suites. All sensors were deployed within two meters of each other spatially at a two-meter height above ground surface. Over four months of data from the winter and spring of 2018 are shown in the figure below. Interestingly, the three tipping-spoon gauges represent the highest and two lowest accumulated rainfall totals, with all three ATMOS 41's measuring accumulated rainfall totals between the tipping-spoon gauges. Although the scatter in the tipping-spoon gauges makes drawing solid conclusions difficult, all three ATMOS 41 units agree within 3% of the average of the tipping-spoon measurements.

The solar radiation comparisons were made on the rooftop testbed at the METER Pullman campus. A Kipp & Zonen CMP3 was co-located with an ATMOS 41 for about a month in the fall of 2017. Readings were averaged over a 15-minute period, and the data show good agreement based on the 1:1 plot. A linear regression shows a 3% underestimation by the ATMOS 41 pyranometer. 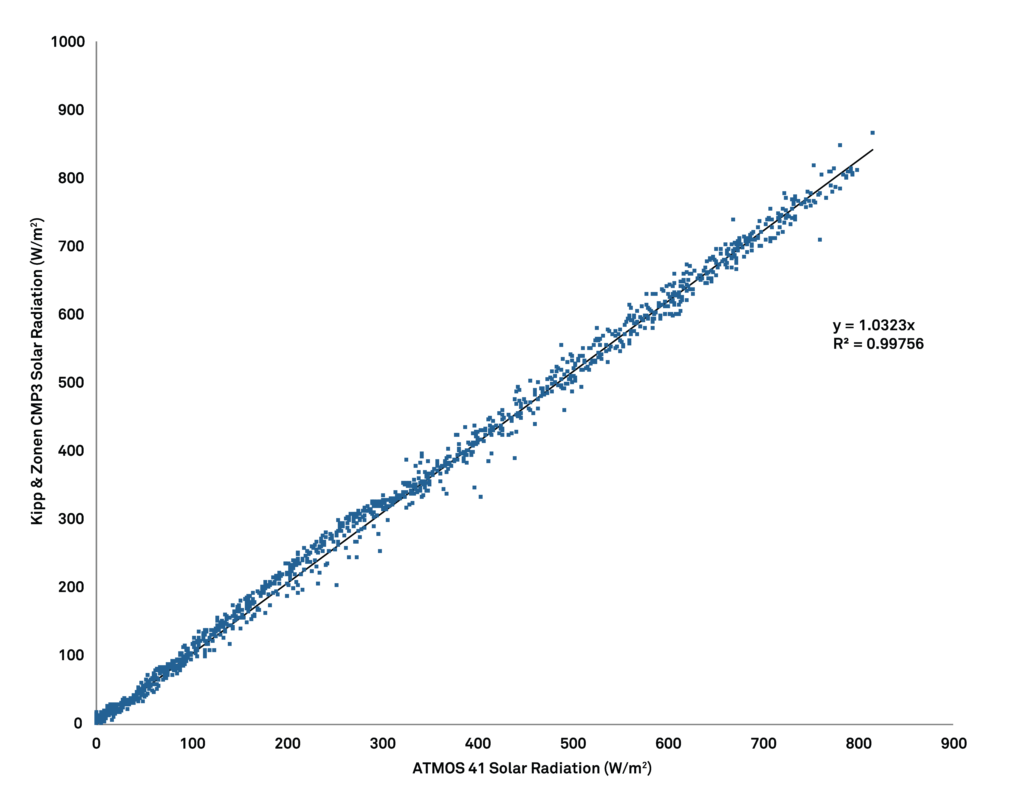 The ATMOS 41 uses a micro thermistor in the anemometer opening and corrects for effects of solar radiation and wind using a basic energy balance approach. Solar radiation and wind speed are combined to adjust air temperature measurement for solar heating and convective cooling instead of the common louvered radiation shield. This method was optimized and verified at the METER Pullman campus using a micro thermistor sensor housed in an Apogee TS-100 aspirated radiation shield as the air temperature standard. The verification results show a 95% confidence interval of +/- 0.6 °C for the ATMOS 41 air temperature measurement, which is significantly better than the error expected for a typical sensor housed in a non-aspirated shield. More information on the air temperature correction can be found in our webinar “Stop Hiding Behind a Shield”.

Data collected in the field use the integrated relative humidity and temperature sensor to calculate vapor pressure (kPa). The figure below shows sensor performance in the field over an eight-day period and gives an idea of what to expect in terms of consistency between vapor pressure measurements. 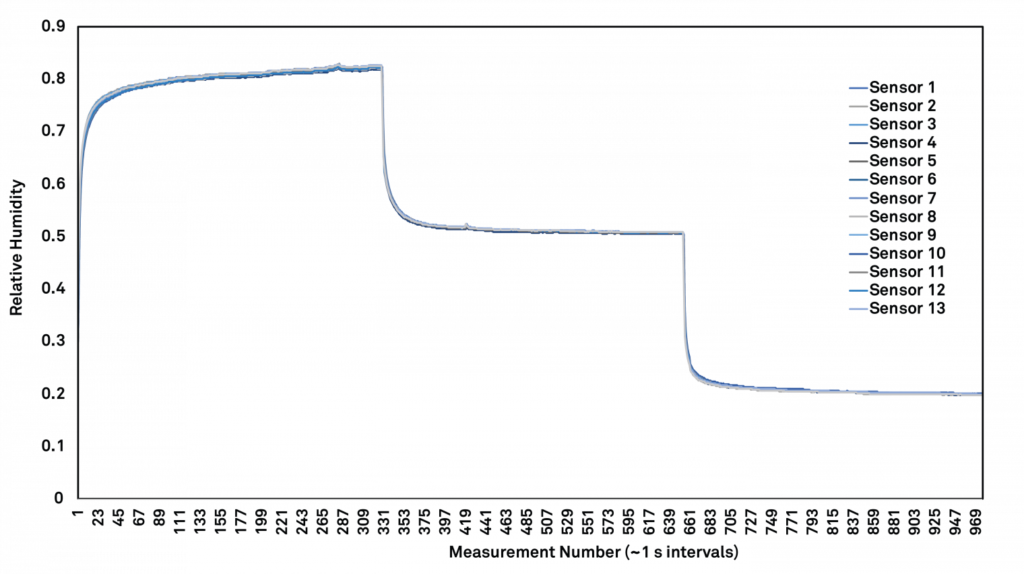 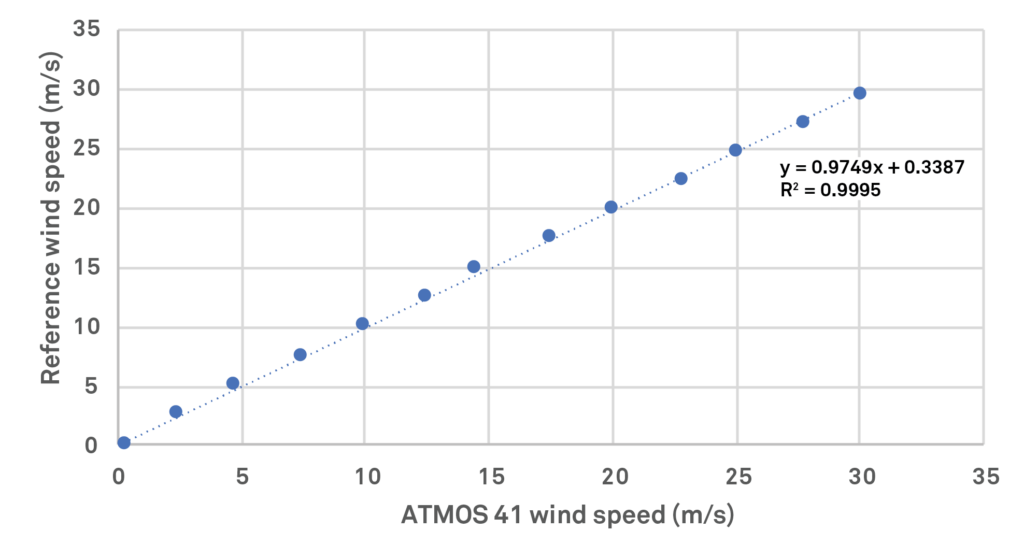 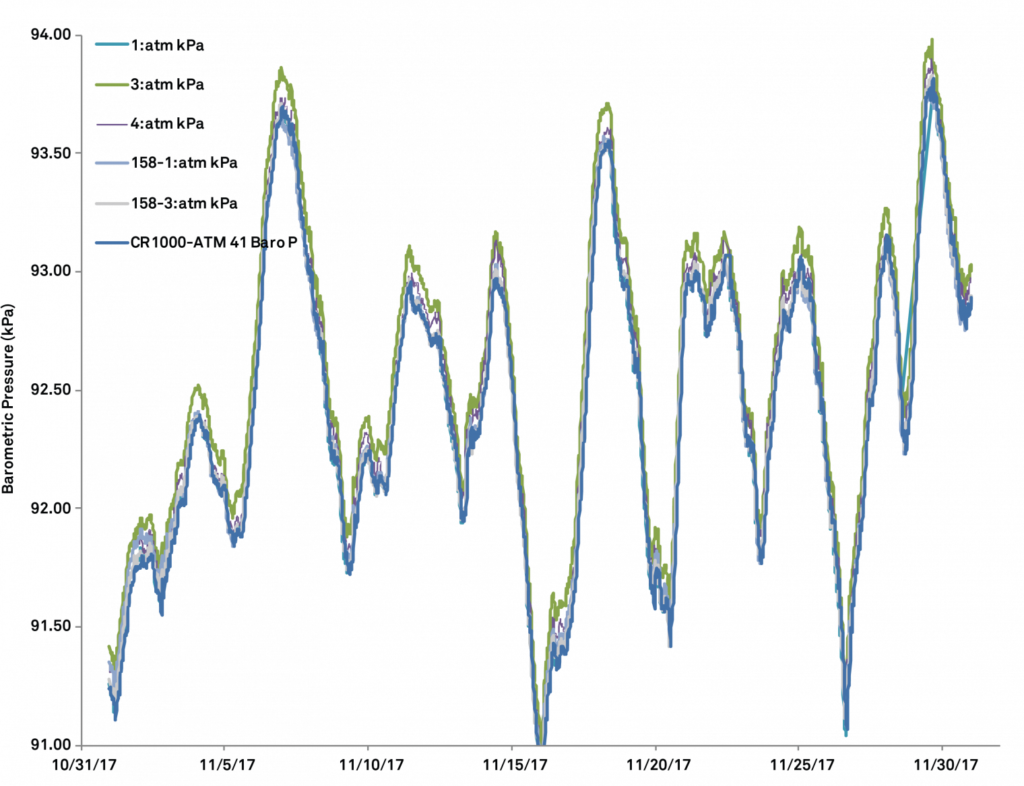