ZSC portable handheld meter is a light-weight, portable Bluetooth device design to operate the METER Group range of soil, weather and plant sensors. The ZSC is compatible with the following range of sensors:

The ZSC pairs wirelessly with iOS and Android mobile devices through the ZENTRA Utility Mobile app to display sensor measurement data and metadata (firmware version, serial number, etc.). The ZSC works with most analog, pulse, and digital sensors supported by the ZENTRA system and supports changing the sensor SDI-12 address for use on third-party loggers. 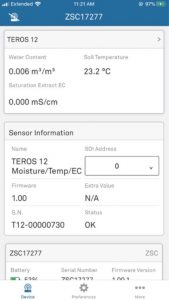 The ZSC operates on an iOS and Android device via the freely available ZENTRA Utility software. Search and download ZENTRA Utility via the App Store or download from the METER Group website.

The ZENTRA Utility Software for the ZSC is an easy to use, intuitive interface. The ZSC and ZENTRA Utility automatically recognise the METER Group sensor connected to the device. Instantaneous readings are displayed on the screen and updated at the user's discretion.

The device can also be used to change the SDI-12 address of the sensor for networking and data logging applications.