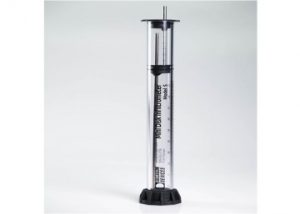 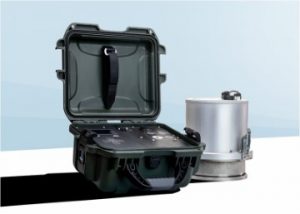 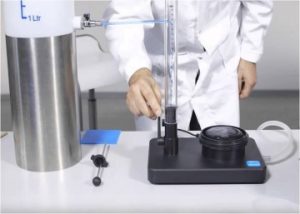 what does an infiltrometer measure? 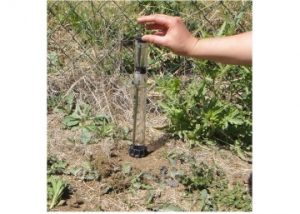 why are infiltrometers and hydraulic conductivity important?

The measurement of hydraulic conductivity is critical for hydrologists, engineers, soil scientists, ecologists, agronomists and plant physiologists because:

- it provides an understanding of the water balance of a system;

- it is useful for quantifying groundwater recharge and dynamics;

- it provides an accurate calculation of irrigation rates and dosing levels for agronomists;

- it is used for nutrient and heavy metal leaching modelling; and

To understand saturated and unsaturated hydraulic conductivity, it is necessary to understand that soils consist of three parameters: solid (i.e., soil particles), water and air. Or, soil consists of two parameters, solids (i.e., particles) and pores (i.e., pockets or spaces between particles).

Under field conditions, it may not be known, or measurable, whether the soil or substrate is entirely free of air and 100 percent saturated. Even through careful and thorough experimental design and instrument installation, it is likely that air cannot be eliminated. This occurs because when applying water to the top of the soil profile, or infiltrating from the top, the air in soil pores can become entrapped. Under field conditions, it is difficult to eliminate air, or difficult to know that air has been eliminated, without destructive measurements or disturbance to the measured soil profile. 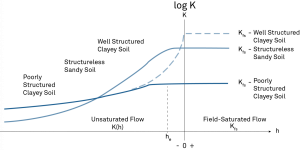 Hydraulic conductivity curves for three different soils. Values to the right of the vertical axis indicate saturated conductivity values. Values to the left indicate unsaturated values. Note that the vertical axis is a logarithmic axis. Thus differences are order of magnitude differences (factors of 10, not factors of 1 or 2). Image source: METER Group.

what influences infiltration and hydraulic conductivity?

Infiltration rates and hydraulic conductivity is dependent on some of the following factors:

- Particle size distribution which can be measured with the PARIO.

- Roughness, tortuosity, shape and degree of interconnectedness between soil pores and particles.

- Fluid dynamics such as viscosity and temperature dependent relationships.

Therefore, to gain a complete understanding of infiltration and soil hydraulic conductivity other soil parameters should be measured.

how to measure hydraulic conductivity? 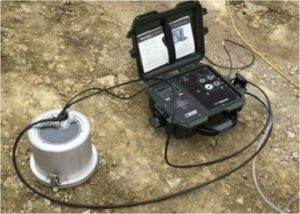 The SATURO measures field saturated hydraulic conductivity and is manufactued by METER Group.

It ponds water on top of the soil, uses air pressure to create the two pressure heads, and a pump automatically maintains the correct water levels.

The SATURO combines automation and simplified data analysis together in one system. It’s designed for one person to carry and set up, and because it automatically maintains the correct water levels, it eliminates constant measuring and adjusting.

The measurement takes some time, but much less time than a ring infiltrometer, and it operates unattended. You can run multiple instruments simultaneously, and it avoids the need for estimating the Alpha factor, eliminating a common source of error. It uses two 20-liter water bags but needs much less water than a double ring infiltrometer because it doesn’t require a large outer ring.

The KSAT, manufactured by METER Group, is a laboratory instrument designed to measure saturated hydraulic conductivity.

METER’s KSAT is similar to a flow cell, except it simplifies and speeds up the measurement because the automation is built into the device.

It’s capable of doing both falling and constant head techniques. The KSAT uses a small soil core, and it has a water column with a burette to control the water flow.

Water flows through the burette, enters the bottom of the sample, and outflows over the top of the sample. The KSAT uses a pressure sensor which automatically measures the pressure head from the water column.

Like flow cells, the KSAT’s limitations are due to a small surface area and that it’s a confined sample. So use the same considerations when sampling for this device.

The big advantage of the KSAT is that everything is automated, which saves time, and it doesn’t require much lab space. In addition, it can be combined with the HYPROP to automatically generate points on both the saturated and unsaturated hydraulic conductivity curve. 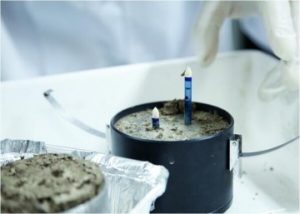 The HYPROP2 is another laboratory based instrument, manufactured by METER Group, that is designed to measure unsaturated hydraulic conducitivty.

METER’s HYPROP is a lab instrument based on a simplified version of the Wind/Schindler evaporation technique.

Inside of the HYPROP are two tensiometers at different heights inside of a soil core which is only open at the surface.

The advantage of the HYPROP versus a flow cell is a completely automated measurement over the full moisture range. HYPROP saves time by automatically generating the curve for unsaturated hydraulic conductivity while you do other things. It provides simultaneous water transmission and retention properties with high resolution (over 200 data points) except near saturation. Combine it with the KSAT for the saturated end of the curve, and with the WP4C water potential instrument (dry soils) to generate full soil moisture release curves. 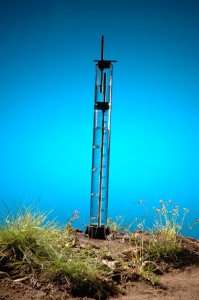 A porous plate is placed on the soil, and the water is pulled out under suction that is controlled by a tower containing a mariotte bubbler.

It controls negative suction by inserting the bubble tube deeper into the water to raise the energy required to pull air in to replace the water pulled through the device.

A tension infiltrometer infiltrates water into the soil under imposed suctions, so you can measure infiltration rates at different negative suctions to segregate pore sizes.

The METER Group range of infiltrometers have been published in numerous peer-reviewed scientific papers. Here, a couple of case studies are presented demonstrating how the infiltrometers provide insights into various applications. 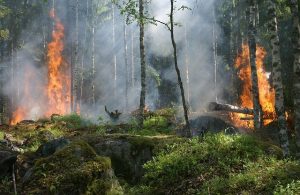 Following bushfires, the soil is often exposed and at risk to erosion. “After a fire, you’ve changed the hydrology of the hillside,” says Dr. Peter Robichaud from the US Forest Service. “Normally in an unburned area, rain gets soaked up by forest floor material on the ground and then it soaks into the soil. After a fire goes through, there’s no forest floor material to soak up the water and the soil may become water repellent due to heat from the fire.”

Reduced infiltration means increased runoff and erosion. As Robichaud explains, “If you have a steep slope and high velocities, along with very erodible soil, things converge rather quickly and you can generate debris flows and mudslides.  It’s not just a 100% increase. It’s orders of magnitude increase.”

To read more, click here to find the entire article on infiltrometers and erosion risk.

Accurate modelling of water transfer between the soils, plant and atmosphere is critical for a range of applications such as hydrology, climatology, plant physiology, ecology and more. A range of models have been developed by scientists that consists of various parameters such as soil water content, water potential, sap flow, atmospheric relative humidity, and more.

To test their model, Deng et al measured soil hydraulic conductivity with the Mini Disk Infiltrometer. With the inclusion of this parameter, the researchers accurately modelled plant transpiration in a eucalypt species.