Dr Fernanda Helfer, Griffith University, was the recipient of the 2016 Edaphic Scientific Research Equipment Grant. In this blog post, Dr Helfer explains her research on renewable energy and wastewater.

From 2013 to 2016, the global amount of fresh drinking water produced through seawater reverse osmosis desalination (RO) increased from 25 million m3day-1 to 36 million m3day-1 and this production will continue to rise due to the increasing strain on freshwater resources imposed by population growth, economic development, droughts and climate change. Despite drought relief, the boom in RO desalination will exacerbate environmental issues, such as increasing energy demands and production of waste brine. Such issues are driving interest and innovation in RO systems powered by clean, emission-free renewable energy sources, and safer methods to dispose of brine waste. In parallel, the expansion of urban populations and economic development give rise to greater quantities of municipal wastewater effluent, which similar to desalination brine, has only marginal economic value. However, substantive environmental, social and economic benefits could accrue from utilising these two “waste” solutions, whereupon a great quantity of clean energy from their salinity differences could be harnessed through a membrane-based technique called Pressure-Retarded Osmosis (PRO).

The integration of renewable power generation via Pressure-Retarded Osmosis (PRO) with seawater desalination via Reverse Osmosis (RO) (referred to as PRO-RO systems) has been demonstrated as a potential approach to provide power to the desalination process and mitigate the impacts caused by the discharge of concentrated brine into the ocean. In PRO-RO systems, PRO is used to supply some of the power requirements for the RO desalination process. Compared to other sources of renewable energy used in RO desalination, like wind and solar energies, which have intermittent and variable intensities, PRO offers a much more stable and continuous supply of baseload power and significantly smaller footprint area, while incurring similar costs. Moreover, the environmental impacts of RO desalination is significantly reduced with PRO, as the brine generated during the RO process is diluted back to seawater concentration by the PRO process.

Fig. 1 shows a conceptual model developed for a PRO-RO system. In this set-up, the RO reject (brine) is used as the draw solution, and a less concentrated solution, such as wastewater effluent, is used as the feed solution in a PRO facility. In the PRO facility, the feed solution permeates the PRO membrane, increasing the volume flow and pressure in the draw solution side. The elevated pressure of this flow is transferred to the RO feed stream (i.e., seawater) with the aid of a pressure exchanger device. This energy offsets part of the energy required for the desalination process. 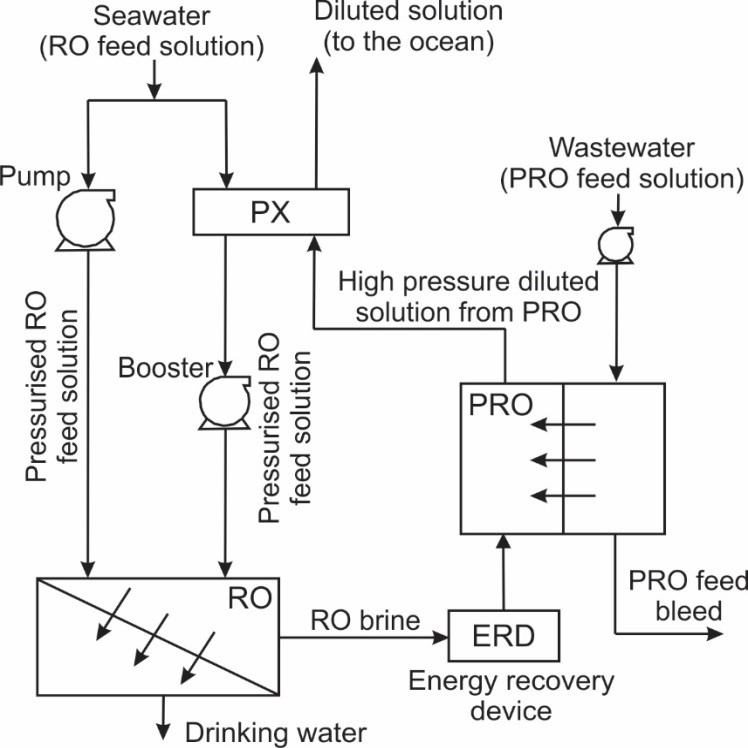 Studies have demonstrated that the extractable energy from the mixing of a solution with concentration similar to wastewater effluent and a solution with concertation similar to desalination brine is 1.50 kWh per m3 of feed. In a previous study, we demonstrated that a seawater-to-brine PRO plant utilizing brine from the Perth desalination plant, could generate energy to offset around 10% of the power used in the desalination process of that plant. This offset is expected to be even higher if wastewater effluent is used, because the salinity gradient with brine will be significantly enhanced. Simulations using brine from a projected desalination plant and wastewater effluent from an existing treatment plant in Brisbane have shown that a 5 MW facility would be feasible. Modelling studies conducted in the US and in Singapore have shown that the specific energy consumption of a PRO-RO system could be as low as 1.0 kWh per m3 of produced fresh drinking water, which is about 40% of the energy consumption of current state-of-the-art RO desalination plants, representing significant energy savings.

These above findings show that investigations on wastewater-to-brine PRO-RO systems are warrant; the next step is to quantify, with more accuracy, the real energy savings that could be achieved, and forms to increase the energy efficiency of these systems, which is the overarching aim of this project. Questions that this project will answer are: i) How can energy efficiency of PRO energy systems and membrane performance be optimised? ii) Can an optimised PRO system provide positive net energy to an RO desalination system and how can the energy efficiency be improved? 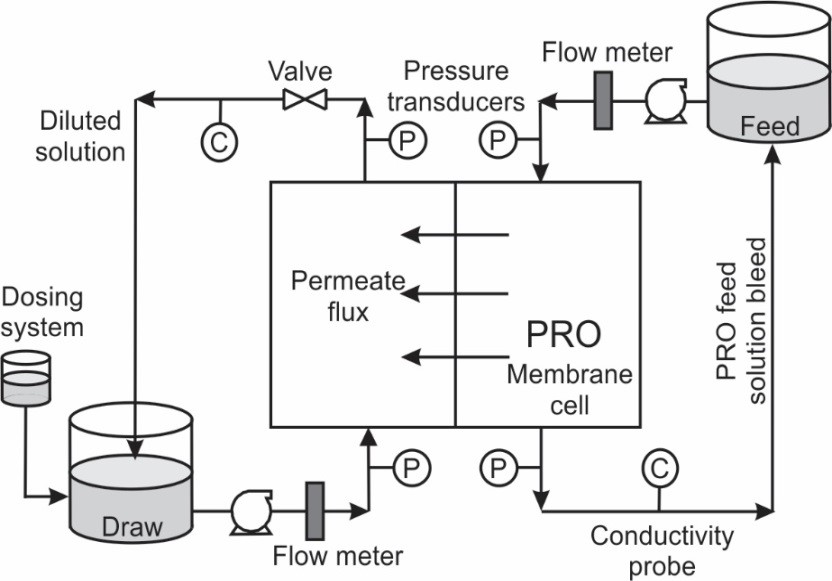 Fig. 2. Conceptual model for a bench scale PRO system built for this project.

A PRO-RO system will be built to quantify the energy offset in the RO desalination system and so to determine the combined PRO-RO system energy efficiency. The difference in comparison with the isolated PRO system (Fig. 2) is that, in a PRO-RO system, a pressure exchanger is placed at the outlet of the PRO membrane cell to transfer the PRO energy from the diluted solution to the RO system. This pressure exchanger receives the high-pressure diluted solution exiting the PRO cell, and turns a rotor that pressurises the seawater stream entering the RO cell. In a real plant (Fig. 1), this means that the work required by the RO pump can be significantly reduced, incurring potential energy savings in the RO desalination process. After transferring its energy to the incoming seawater stream in the pressure exchanger, the diluted solution from the PRO cell is either discharged into the ocean. This diluted solution has approximately seawater salt concentration, meaning that the environmental impact associated with its discharge is almost negligible. The PRO-RO process efficiency will be determined as the ratio between the specific energy of the PRO-RO systems and the specific energy of an isolated RO system. The specific energy is defined as the energy required per unit volume of desalted water. In an RO system, the specific energy is the sum of all energy consumptions (e.g. pre-treatment, water conveyance, pressurisation of seawater) divided by the volume of desalted water. In a PRO-RO system, the specific energy is the sum of all above energy components, minus the net energy generated in the PRO system, divided by the volume of desalted water. The comparison between specific energies between these systems will give an indication of the amount of energy that can be saved in the desalination process with the aid of a PRO plant, and the best configuration for maximum energy efficiency.

The project will bring benefits to the environment, economy and livelihoods:

Environment: this project will offer a technology to provide clean, renewable energy for seawater desalination. This has potential to reduce the reliance of the desalination industry on fossil fuel energy, consequently contributing to reduced impacts of greenhouse gas emissions, and helping countries meet their gas emission reduction targets. The proposed technology and method also offer an opportunity to eliminate the current impacts of the direct discharge of concentrated brine on marine environments of conventional RO plants.

Economy: this project provides an opportunity to reduce the energy cost of desalination systems and to add value to waters with only marginal economic significance and of difficult beneficial use. The proposed brine-to-wastewater PRO-RO system has potential to significantly reduce desalinated water costs and prices, resulting in indirect savings that could be re-invested in different areas of the energy and water sectors. With lower costs and environmental impacts, the PRO-RO system will make production of fresh water through desalination a more attractive infrastructure investment option in providing water security to population, from remote island communities to large urban centres;

Livelihoods: this project will help meet worldwide demand for fresh water through a rain-independent water supply technique that is assisted with clean, renewable energy, and has reduced environmental impacts and energy costs. As well as large centres supplied by desalinated water, the technology proposed in this project can also be applied in remote island communities suffering from water and energy supply issues.